Ethereum’s price action has been somewhat lackluster as of late. It has been closely tracking Bitcoin and recently declined beneath the key $380 level after making several attempts to flip it into support.

Because Bitcoin has been closely tracking the stock market, where altcoins like Ethereum trend in the near-term will likely depend largely on key macro developments like a phase 2 stimulus package, as well as the upcoming November elections.

One analyst is noting that bulls will likely prevail over bears in the coming few months.

He expects Ethereum to enter price discovery mode in 2021, sending it rallying up towards $750 or higher.

At the time of writing, Ethereum is trading up just under 2% at its current price of $375. This marks a slight run from its recent lows of $365 that were set just a couple of days ago.

The selling pressure that pushed ETH below $370 has since subsided and shows continued signs of alleviating as the entire altcoin market begins catching some momentum.

Unless BTC sees a sharp move lower in the near-term, it does appear that Ethereum bulls may be able to recapture $380, which would be a positive short-term development.

Analyst: ETH Likely to See Rally to $750 in Coming Months

While sharing his thoughts on where the market might trend next, one analyst explained that he is watching for Ethereum to enter price discovery mode in 2021.

He believes that this will catalyze a move up towards $750, which would mark a roughly 100% climb from where it is currently trading at.

“ETH: Price discovery 2021. Glaringly obvious only the patient will win but there’s trades to be taken within,” he said while pointing to the below chart. 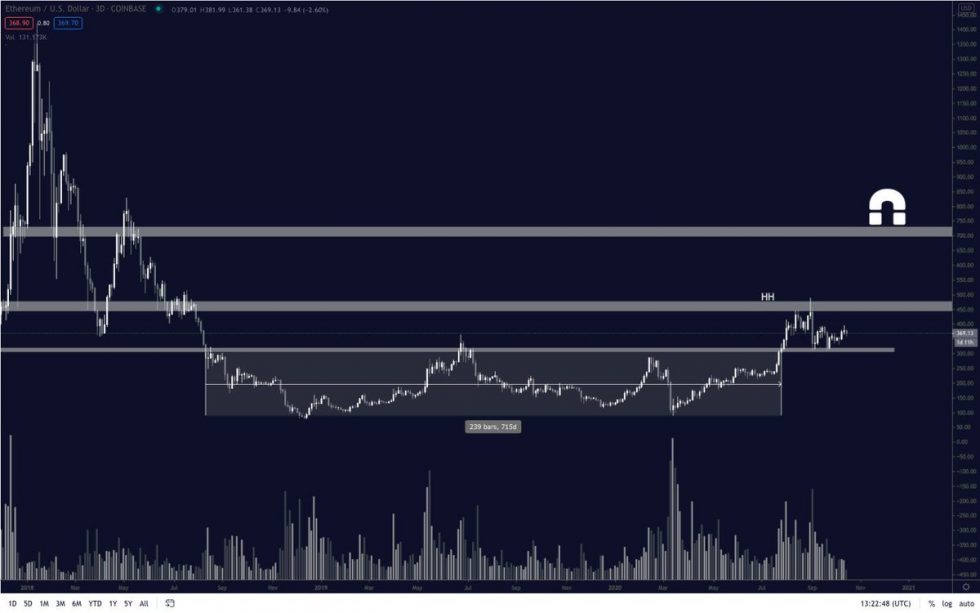 How Ethereum reacts to $380 in the coming few days should offer investors with some insight into where ETH will trend in the mid-term.

Ethereum price tops $400 since late September and extends the price action to $420. ETH/USD has a smooth ride to...

The mandatory upgrade is the first post-launch upgrade to the Filecoin network.

A Georgia county government database being used for the 2020 election has been crippled by a ransomware attack. With the...

Is a Pandemic the Prime Time for Scammers? Money Laundering in the Age of Covid-19

CBDCs, while enhancing transmission of monetary policy, are potentially risky

Key Metric Shows Bitcoin’s Rally Past $20,000 is About to Start

Crypto 2020: predictions and investment ideas for the year ahead

Is a Pandemic the Prime Time for Scammers? Money Laundering in the Age of Covid-19